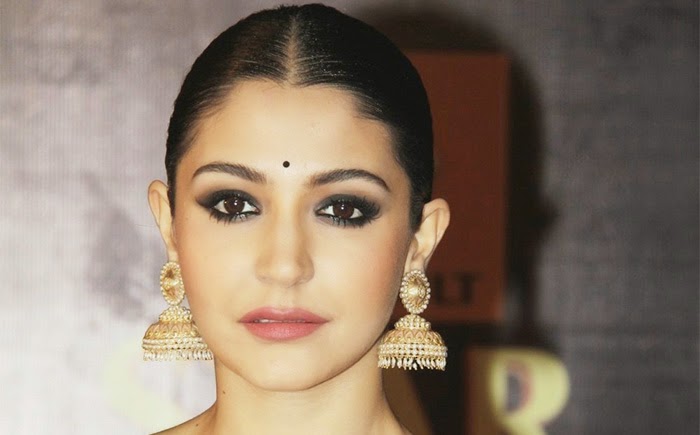 Anushka Sharma took Bollywood by storm with her debut film. It was a fairytale beginning ─ acting with Shahrukh Khan on the very first movie is a dream debut! Anushka made her presence felt with her spontaneous acting and natural beauty. The rest, as they say, is history!

Anushka today is one of the most sought after actresses in Bollywood. Her clean flawless skin with deep black smokey eyes creates a jaw dropping combination. Do you want to take a leaf out of Anushka’s makeup secret? Not sure how to do it? No worries. Pull out your brushes and eyeshadows and we’ll teach you how to create the deep black smokey eyes look, inspired by Anushka.

Let’s know the products in the list, which we are going to use to get the Anushka Sharma inspired eye makeup look:

Follow the below steps to get that mesmerizing Anushka Sharma inspired eye makeup look: Like all eye makeup tutorials, we should start the eye makeup with gently patting some eye cream to the under eye area. It will hydrate and relieve the dryness as dry skin will leave makeup patchy. Apply and blend the cream completely with a light hand until it is fully absorbed into the skin. People with pigmented eyelids, would have to use an orange or peach colored corrector prior to layering of the concealer to get a flawless finish. Set the concealer with a translucent or compact powder to prevent creasing of the cream applied. Now apply a creamy black eyeshadow or a black kajal base to the entire eyelid area. Restrict the application above the natural crease area of your eyes. The application of the cream base in this step needn’t be very neat as we will smudge it later to create a smokey look. Pick a rounded smudger or pencil type brush to softly blend the rough edges of the creamy kajal base applied in the earlier step. Now, pick a matte black eyeshadow and apply it to the center of your eyelid area. You should remember to apply this eyeshadow above the smudged-out creamy base. Gently pat the black eyeshadow and avoid sweeping motion to achieve maximum color pay off. Blending, blending and blending ─ that’s what this whole step is about. Pull out a clean fluffy blending brush and create circular motions over the darker brown eyeshadow applied in the previous step. Blend all the eyeshadows for a seamless finish. You should remember to achieve a soft transition of colors from black, dark brown to medium brown. Then, pick a shimmery or matte cream eyeshadow. Now apply the eyeshadow to the brow bone area of your eyes to lift your eyebrows. Then, curl your eyelashes and apply lots of mascara to create an illusion of thicker and fuller eyelashes. If you love intense and dramatic looks, you can add false eyelashes.

Not just Anushka, any woman can look amazing with this eye makeup!

Did you like this sexy and dark makeup tutorial? Let us know your experiences in the comments section below.