6 Types Of Mushrooms To Boost Your Immune System 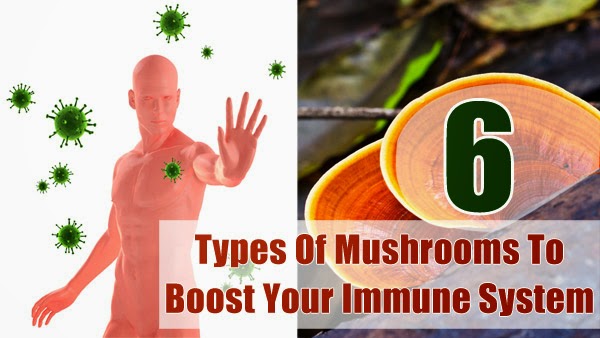 When someone says mushrooms, what comes to your mind? Usually, people think of Portobello mushrooms that can be concocted into delicious delights. But did you know mushrooms can also boost your immune system and help you fight diseases? Now, before you go off hunting for mushrooms, there are a few things you should know about this tasty fungus.

Mushroom and Your Immune System:

Mushrooms contain high amount of vegetable proteins, zinc, iron, fibers, amino acids, minerals and vitamins. As a result, they are considered health food that is extremely beneficial for the body, particularly the immune system.

In Traditional Chinese Medicine, mushrooms are used for promoting vitality, good health and for enhancing the body’s ability to adapt. Certain scientific studies have shown the probiotic properties of mushrooms, which means that they have the ability to strengthen the body and ward off certain health conditions by maintaining the body’s homeostasis.

Mushrooms contain certain compounds, which are known as Host Defense Potentiators or HDP. These compounds are known to boost the immune system and this would explain why these compounds are used in cancer treatments in China and Japan. Research has also found mushroom contain polysaccharides that prevent HIV from destroying T cells. These cells are white blood cells that fight diseases and infections in the body.

There are many different kinds of edible mushrooms, but some are more effective in boosting the immune system. These so-called medicinal mushrooms function as disease fighters. Some of the mushrooms you should include in your diet are:

This mushroom is indigenous to Brazil and is the most potent immune booster out of all the mushrooms. The mushroom grows near Sao Paulo and the locals call it Mushroom of God. A couple of decades ago, researchers noticed the locals were healthy and not prone to diseases. This prompted the researchers to delve deeper and they found the Agaricus Blazei Murill mushroom was the reason. This mushroom can boost your immune system and also has cancer-fighting properties. Research has shown that it has the highest levels of beta-glucan (long-chain polysaccharides) out of all mushrooms, making it a potent immune enhancing mushroom.

The Shiitake mushroom can improve the functioning of your immune system, lower your cholesterol levels and prevent heart disease as well as elevated blood pressure. If you consume this mushroom regularly, it will build your body’s resistance against viruses and also help fight certain diseases, such as cancer and AIDS.

This mushroom is a powerhouse of nutrients, including magnesium, potassium, amino acids, niacin and vitamins B2, C, and D. In addition, it contains beta-glucan, which helps lower elevated blood pressure and improves the working of the immune system. This maitake mushroom for immune system is considered a boon for diabetics and obese people.

Eating this mushroom can naturally increase the production of tumor-inhibiting compound, interleukin, in the body. In addition, the mushroom has anti-inflammatory, anti-viral, analgesic, and antioxidant properties. Reishi mushrooms can lower blood pressure and help detoxify the liver.

Also known the Asian turkey tail, this mushroom has polysaccharides as well as polysaccharopeptides, which have cancer-fighting properties. In Japan and China, this mushroom is recommended to patients undergoing chemotherapy and radiation, as it boosts the immune system and also promotes anti-cancer activity in the body.

This mushroom contains beta-glucan and other nutrients that promote a stronger immune system. As a result, it is often recommended to people undergoing cancer treatment or those who are suffering from immune disorders and chronic fatigue. Cordyceps also has anti-aging properties and can do wonders for the nervous system.

These are some mushrooms that are extremely beneficial for the immune system. If you want to live healthy and ward off diseases, you should make it a point to include these mushrooms in your daily diet. There are so many botanicals, such as mushrooms, which can fight illness and disease and boost your immunity. It is time we find our way back and make use of the natural products that Mother Earth offers us to enjoy natural good health.

Do you like mushrooms? Are you going to include mushroom for immune system boosting? Share your favorite recipes with us in the comments section below!